From the Humber Bridge to Lincoln…wild camping in November is quite hard (but not impossible).  Not interesting enough to write about, but a few nice pictures: 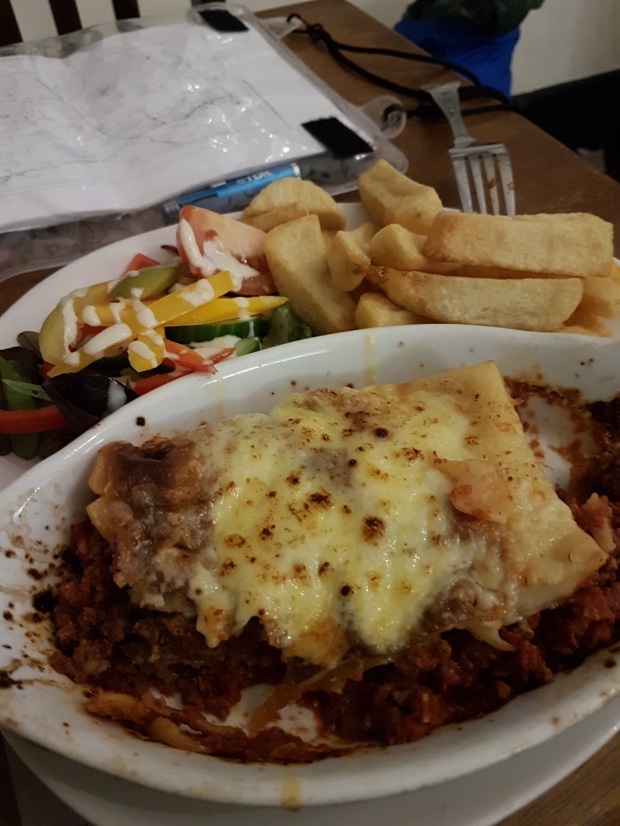 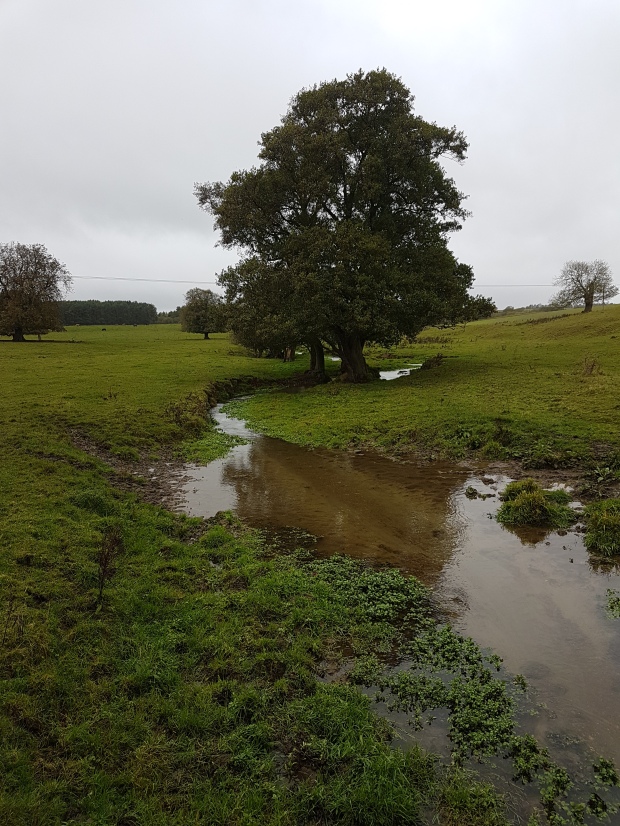 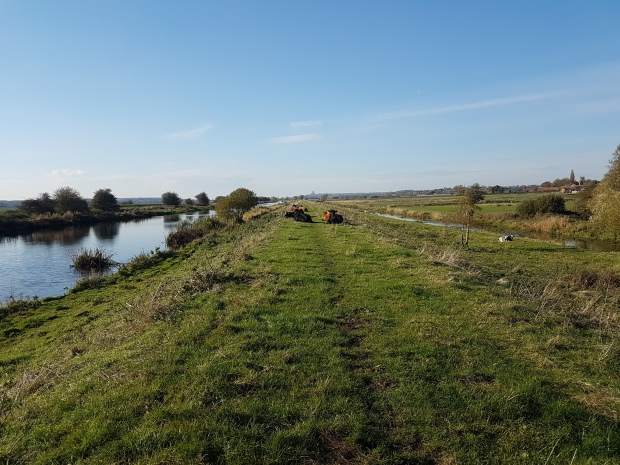 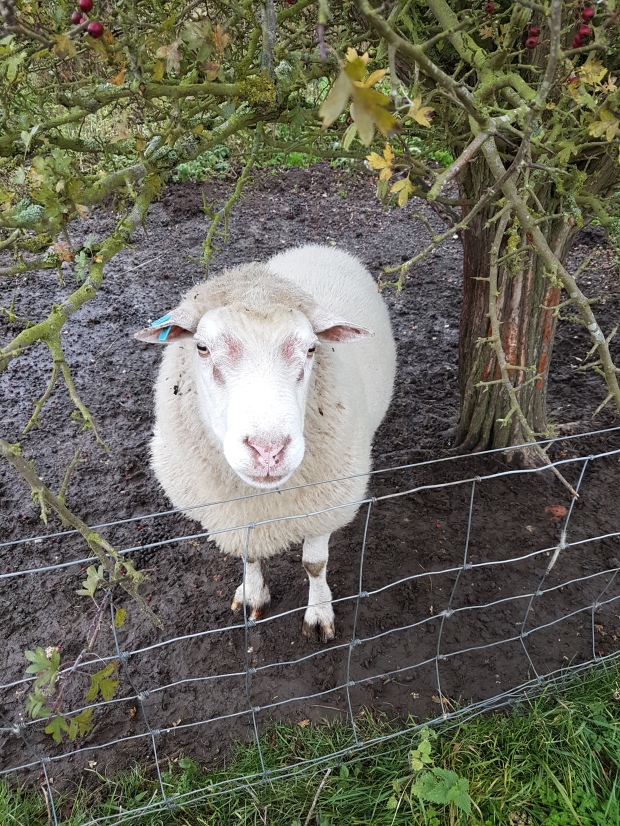 It seemed like a great idea at the time!  I would be travelling up to the lake district for a race, the Lakeland 50 on a weekend at the end of July, so why not extend it slightly and have a few days holiday at the same time?

This, over the first few months of the year, especially while my son was slogging away at his GCSE’s, turned into a full week in the Lakes, and although we talked about the whole family coming up…in the end it turned into just Michael and I.

Oh yes, did I mention we planned to wild camp?  I.e. carrying everything we needed so we could just stop wherever looked nice in the evening and make up a camp.  A particularly helpful friend, Mike Inkster, had lent me a little one man tent, sleeping bag & mat, which were unbelievably light, but with two of us going I began the long-winded process of finding something acceptably light but not too expensive that I could use.  In the end, I found a rather useful company called Alpkit who seem to be the ‘value’ side of sports kit – good quality but £120 for a sleeping bag rather than £300.

So, a load of new kit, a couple of practice camps near home (which got Michael used to waking up freezing cold!), and we were ready to go.  The packs we’d be carrying were quite heavy, but I was confident we could cope with some mileage if the climbing was not too bad.

Drive up Sunday, and park the car in Coniston.  Get the bus to Ambleside, where we had a b&b booked (for a good nights sleep!).  On Monday we would walk from Ambleside to Coniston, which was about 15 miles, and camp somewhere near Coniston.  The added benefit was that we could be near the car if we were caught out by the weather or had a problem.

Tuesday was going to be the big day, with a route of 19 miles (possibly longer) and some huge ascent.  We would follow the first 20 miles of the Lakeland 100 route from Coniston to Wasdale Gap.  I knew this would be a test for us both…..a long way, over poor terrain, carrying heavy packs, after an uncomfortable nights sleep, in possibly poor weather.  We would camp at somewhere quiet in Wasdale.

Wednesday was the final push to Keswick, another 14 miles or so, and to a b&b and a soft bed!!   Then a couple of days of rest before the 50 mile race (for me).

We would be travelling very very light…the only spare clothes we would have while hiking was a clean pair of socks each day, although we both had a pair of quality waterproof socks to protect our feet from gangrene.  As well as our tents and sleeping bags, we had a tiny cooker, some noodles, and water bottles, as well as lots of ’emergency’ things that we didn’t use in the end (water purification tablets, a sharp knife, first aid kit etc).  We were well kitted-up.

At the start of a long walk.  Monday morning and we look cheerful & well rested.

You can see from the above picture, we were ready for rain…and it did rain all day!  Marvellous!

The walking was quite good for most of Monday, on a reasonably easy route.  It did rain though, and it was very wet underfoot.  We’d had a massive breakfast though, so were in good spirits.

There was a few of these massive wall-stiles, which were very slippery.  The rain, by lunchtime, had soaked our waterproof jackets completely, so Michael had to put on one of my plastic ponchos to keep the warmth in and the rain out.  It wasn’t ideal but did the job.

The scenery was well worth it though.

And the local wildlife was interesting too!

We stopped for a bite to eat at Tilberthwaite, just before a big climb and the last few miles to Coniston.  Luckily it stopped raining for the 20 minutes that we stopped, but as we began hiking again, we sheltered under a convenient bridge while the next batch of rain passed.

I love the climb out of Tilberthwaite, and we met a slightly lost group of Duke of Edinburgh students (doing the Gold award) near the top.  We were all heading for the Coniston, so they followed us for about a mile, until we were at the highest point. 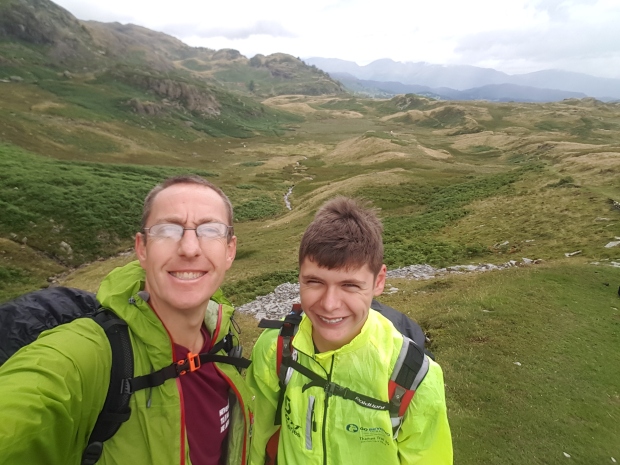 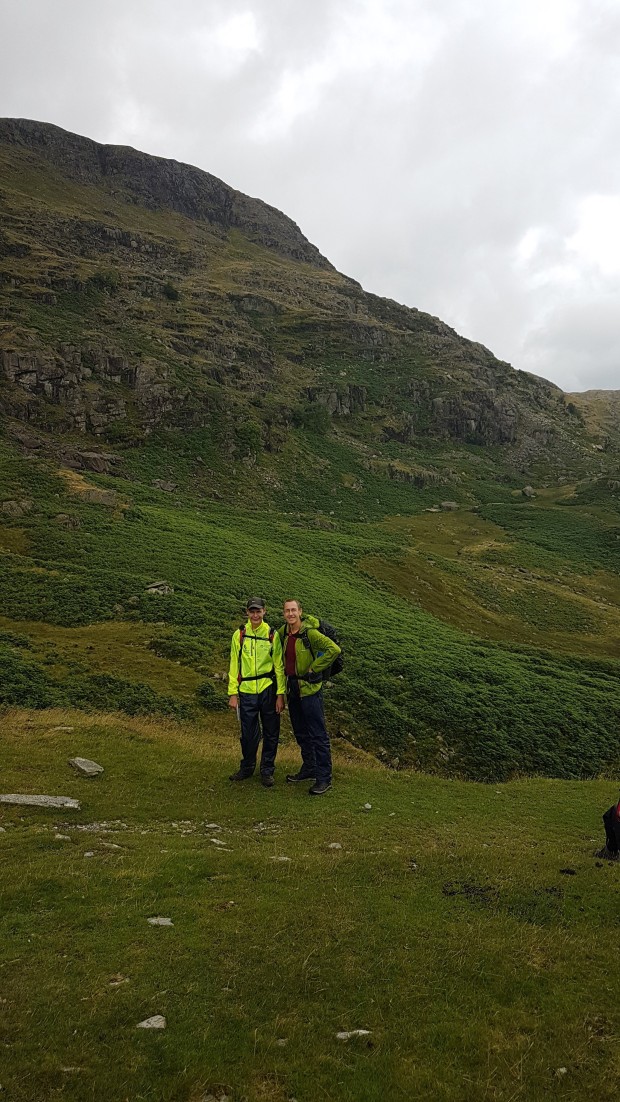 Useful to find a helpful student to take a picture!

Spot the ones still standing, and the D of E students slumped on the ground.

So we finished the route for Monday, actually clocking up about 18 miles somehow, which made it a much longer day than I’d planned.  This was supposed to be the easy first day!  Once we’d found a nice spot to spend the night, we headed for the pub and warmth and food.  Very nice it was too!

The camp was just by a river, and a nice wire fence that was perfect for hanging things from.  There also seemed to be a huge quantity of slugs in the vicinity, no idea why.  Most important, it was very sheltered by the overhead trees, and dry underfoot. 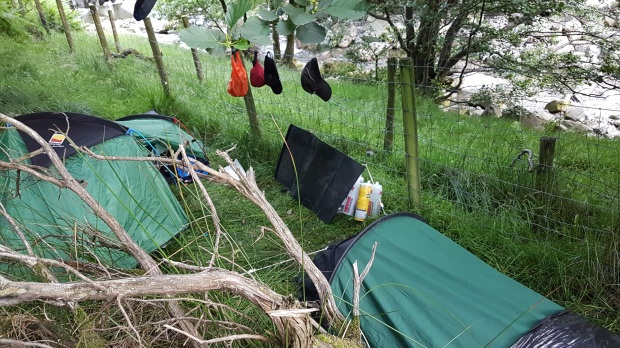 The next morning was an early start, as we had a long way to go!.  We were up and packed by 7am, and with only some super noodles inside us we needed to walk to the first pub quickly!

I’d had a fair bit of coffee, and Michael had some hot chocolate, to warm us up.  It was cold, but at least it wasn’t raining!

I’d warned Michael that the first climb out of Coniston was the toughest, with both the terrain and ascent being very hard.  To be fair, he did amazingly well, and by 10 am we were at Seathwaite eating Pringle’s. 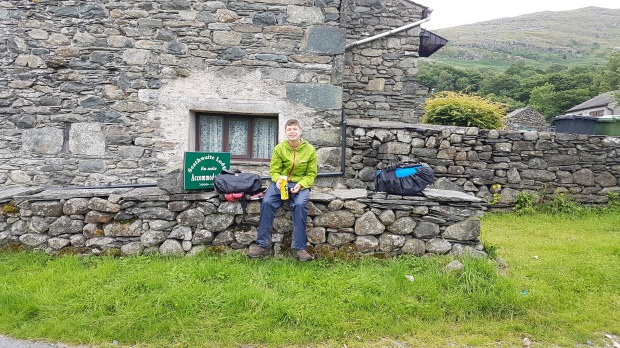 Seathwaite, Pringle’s, and a rest!  Phew!

However, Seathwaite was only 7 ,miles in, and we had a long way to go.  On the positive side, the weather was good and we knew there was a good pub for lunch at Boot. 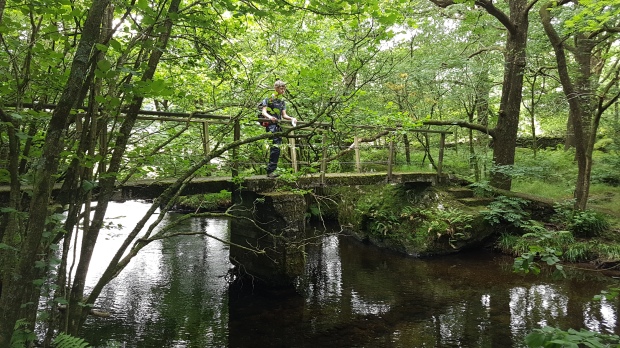 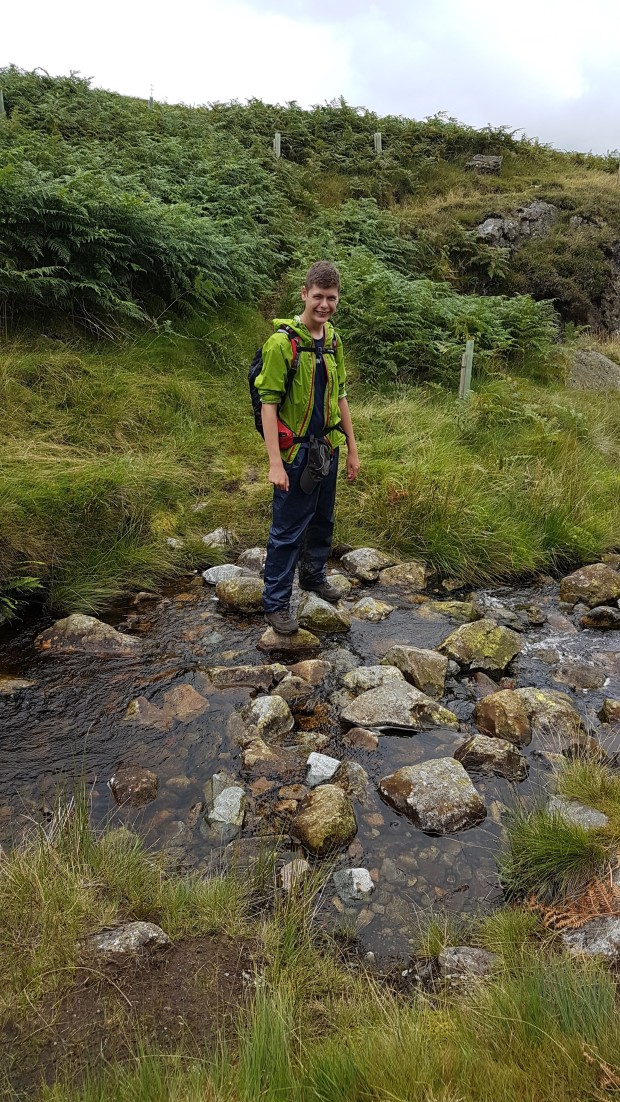 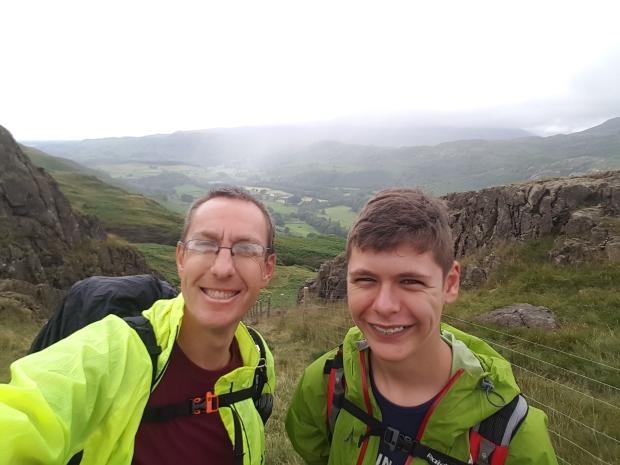 Looking quite happy, at the top of the latest ascent.

This is what we had to climb down, after the picture above was taken.

We stopped for lunch at Boot, which we both needed.  Michael, bless him, fell asleep he was so tired.

It was tough hiking, with lots of ascent and terrible terrain and we were both getting tired towards the end of the day.  However, some sections were just gorgeous, with the impression you could see for many miles.  At the top of some of the ascents, we were convinced we could see the sea.

Our camp on the Tuesday night was, thankfully, a decent clearing. It had been dry most of the day and although we were shattered, it was great to stop.  We set up the tents and shot off for the pub.  Unfortunately, just as we set off, it started raining, and it didn’t stop until Wednesday morning.

However, the pub was good, and the food was better… 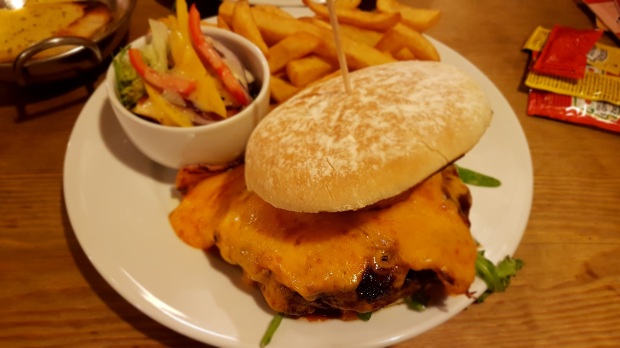 Breakfast was on it’s way!

We’d decided the previous night that we would take it easy on Wednesday, rather than going for another massive day.  Both of us were pretty shattered, and after a fairly bad nights sleep in the rain I think we made the right call.

We would walk over another massive ascent, Black Sail Pass,  and then stop for lunch at the most remote Youth Hostel Association hostel, which  can only be accessed on foot.  This would be about 8 miles of hiking, but would allow us to get the bus to Keswick for a b&b without too much effort.

The start of Wednesday, at Wasdale.  Do we look tired and smelly?  That’s because we were!

This picture shows where we’d walked up, on the way through Black Sail Pass.  Lots of stopping to rest, in order to keep going!  But look at the blue sky…that was great! 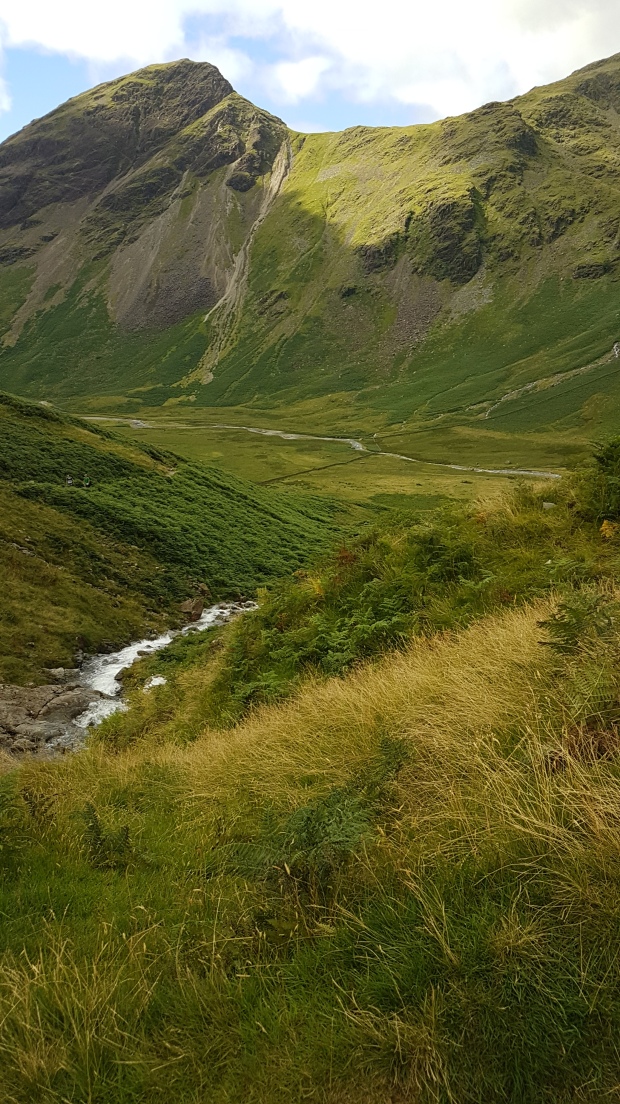 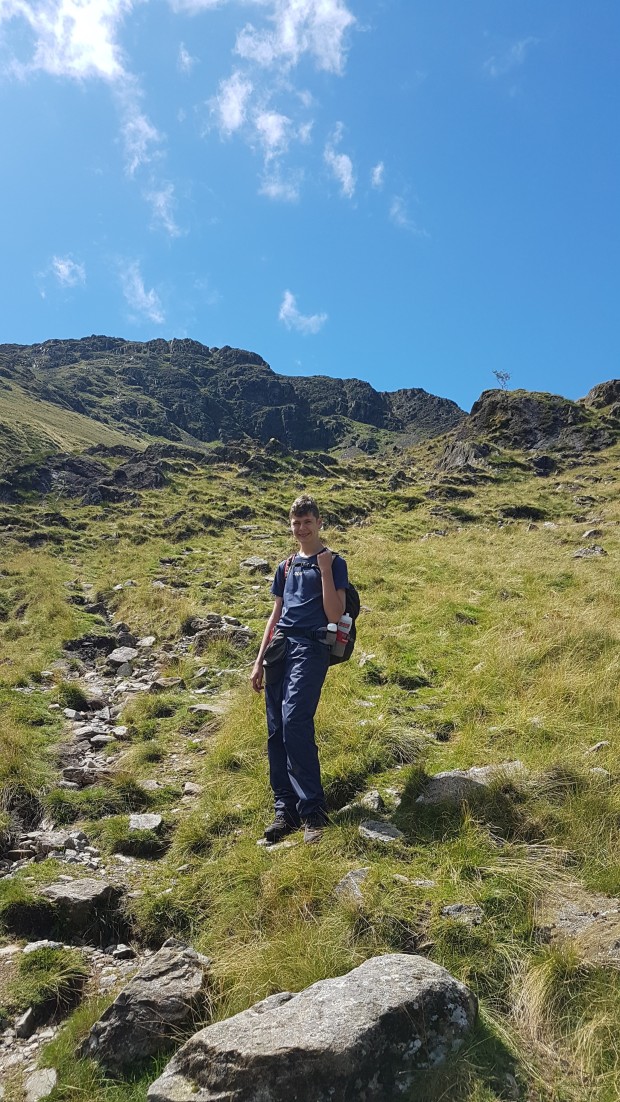 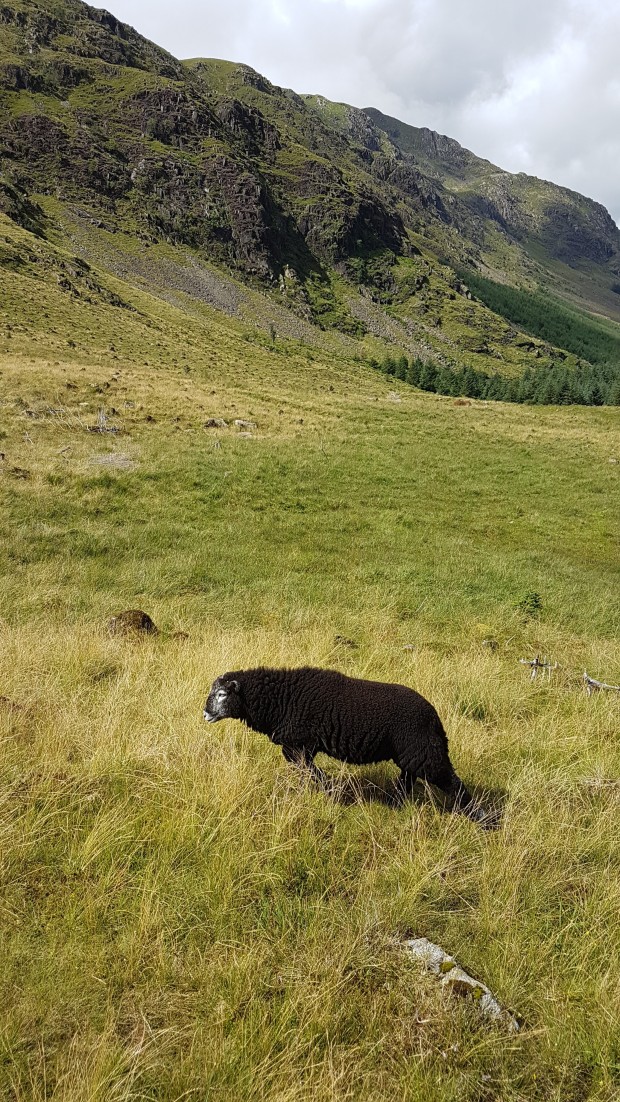 A sheep.  Did not give a toss. 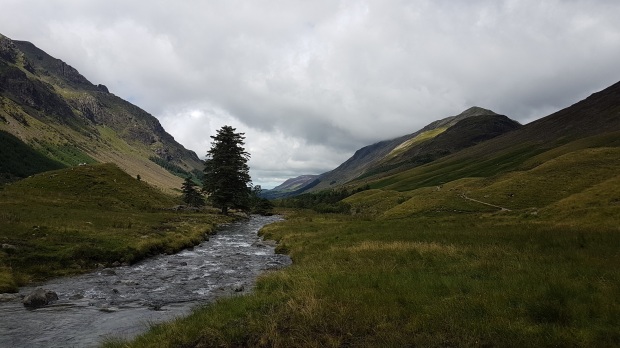 And so back to civilisation, at Buttermere, where the bus stop was.  We had a tuna sandwich and a sit-down.

We had covered just over 50 miles in three days, over massive passes and rough terrain, with both of us carrying everything we needed for two nights of wild camping.  We had eaten well in the evenings, but with minimal breakfast…with hindsight I would make more effort to ensure Michael had a decent breakfast.  I think I’m used to ‘running on empty’ more than he was, and I had the benefit of coffee (caffeine!) to spur me on through the first few hours of the day.

It was a spectacular few days though, and was almost worth the four months of GCSE revision…but not quite.

Somehow, I don’t think words will not truly give the impact of my four days in the lake district.

It was exceptional.  I drove back, 600 miles, smiling all the way.

I think my pictures will probably tell the story better than I ever could….

This is where I was going…. 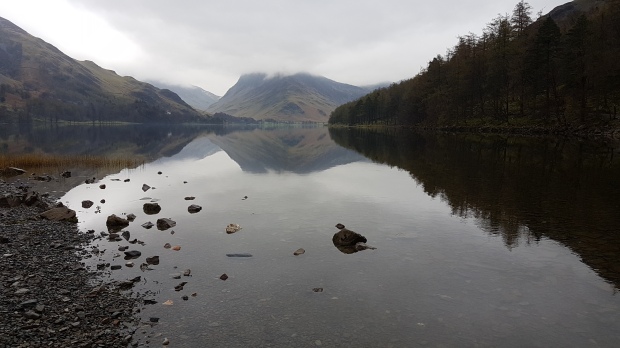 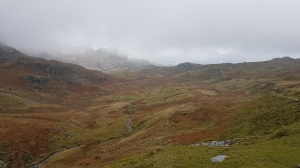 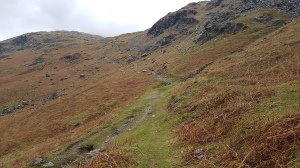 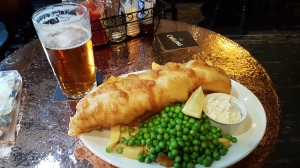 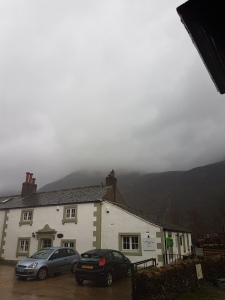